Verizon is a well-known broadband and telecommunication company, and was the largest U.S largest communication service provider as of September 2014. However, this broadband company now launches an own-brand Ellipsis 10 tablet. 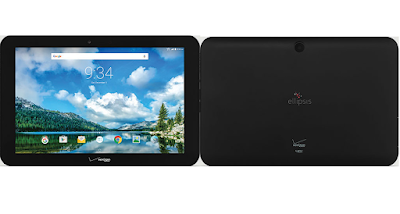 According to Verizon official blog, we were informed that the tablet as per the name features a 10-inch full HD display, which is actually a massive display along with Verizon’s 4G LTE network. It also comes with a mega 9100 mAh battery which lasts up to 25 hours during usage.


Specs-wise, the tablet runs on Android 5.1.1 Lollipop from the box, no word for the processor and chipset and RAM. However, the featured processor is coupled with a 16GB internal storage memory and accepts external storage up to 32GB via Micro SD.

The Ellipsis 10 tablet featuring 10-inch full HD display has a 1,920 x 1,200 screen resolution, and the tablet a also comes with a 2MP front facing camera and a 5MP rear unit.

Verizon’s own-brand tablets are exclusively available on Verizon, same with the Ellipsis 10 tablet. However, pricing starts from $199.99 with a new two years contract or $299.99 for the full price as stated. Alternatively, pricing for the 2 years contract can be paid installments with$12.49 for the next 24 months.