If there is any smartphone manufacturing company that is tough competition for an Apple product, then it is Samsung. Since ages, the world has been largely divided into Apple fans and Samsung fans. Recently, the comparison and competition has reached its highest peak with the anticipation and expectations hooked onto Apple's iPhone 7 and Samsung's Galaxy S7, both flagship devices of the companies. 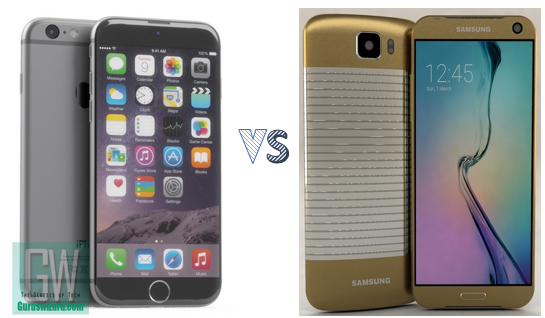 Although no confirmation has been made about the launch of both the smartphones, these are only assumptions and rumours based on the previous records of the companies. Here are the comparisons drawn between the two devices, including when they will be supposedly launched and their specifications:

- Release: While Apple iPhone 7 is expected to be unveiled in September this year, Galaxy S7 will not be launched until 2016. Moreover, the launch of S7 may also depend on the launch of iPhone 7 since the companies are rivals.

- Design: iPhone 7 is rumoured to have a flexible design. By flexible,we mean literally flexible, i.e. bendable according to will, design. On the other hand, S7 is also expected to be a foldable phone. Needless to say, the competition is very thick.
- Display: Galaxy S7 is anticipated to be equipped with 4K display on an AMOLED 5.5 inch panel. The company has already announced its desire to produce displays like these using the new IGZO technology. Meanwhile, iPhone 7 is assumed to sport a bezel-less display screen coupled with a material which will be a substitute for sapphire glass.
- Camera: Sources claim that iPhone 7 will be equipped with professional DSLR quality camera. A technology that uses mirrors and multiple lens will be what iPhone 7 camera will be designed with. On the flip side, Samsung's S7 is said to sport a 30 MP camera, taking a leap from its previous 16MP one for the primary camera, whereas the secondary one will be 10 MP, which is double than 5 MP in S6.

- Operating Systems: With the iOS 9 launched in June earlier this year, it is no suspense that iPhone 7 will definitely be equipped with it. Talking about Android, there is no news yet about Android 6.0, except the nicknames which will be "Milkshake" or "Marshmallow", as a successor to the current Android Lollipop.
- Storage: iPhone 7 will have three versions of storage systems - 16GB, 64GB and 128GB. On the other hand, Galaxy S7 will also have three versions - 32GB, 64GB and 128GB. It’s a close call competition here too.
- Processor and RAM: While Samsung Galaxy S7 will sport 4GB and 6GB of RAM and will run on 64-bit Exynos Processor, Apple will have 2GB RAM coupled with its latest A9 chipset.

There are several changes made to the design of iPhone 8, such as replacing the Home button with a "Sense" button. However, both the flagship devices of these two rival companies are set to take the world by storm as and when they are launched.
Anyikwa chinonso Comments