Recently, Microsoft announced the release of Microsoft Office for free on other popular devices, such as the iPhone, iPad and Android tablets. This is an encouraging news, and guess what, you won't be needing your notepad to produce most of your documents. 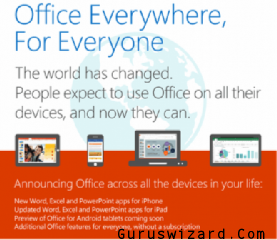 As for iPhone and iPad users, am also happy to announce that Microsoft also released three separate office app, which includes the Microsoft Word, Excel and Powerpoint. And these apps are really cool and the most functional apps in Microsoft Office.

Read also: 5 Reasons You Should Download and Install Windows 10

For the Google Android tablet users, sorry for the shady news, but am also going to inform you guys that the app isn't ready. For now, Microsoft announced that the release of the free Microsoft Office for Google Android tablets would be ready in early 2015, and it would be available via Google playstore. Meanwhile, you are expected to sign up for the free preview version of the app and gain free and quick access to Microsoft Office app.

Below are the Download Links of Microsoft Office for iPhone, iPad and Android Tablets

Hope the above details was informative. If any of the details wasn't clear to you, please don't hesitate to let us know, and we won't delay to forward feedbacks via the comment section.
Anyikwa chinonso Comments